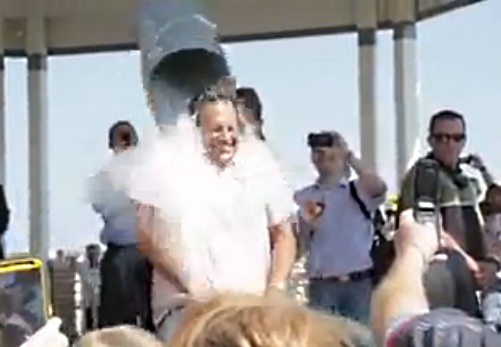 Unless you’re totally off any form of social media, or you live under a rock (hmmm, I guess now a days they’re pretty much the same thing, huh?) you’ve no doubt seen people you know, and many that you don’t, pouring buckets of ice water over their heads.

The ALS Ice Bucket Challenge has been pouring all over every social media outlet there is.  The stunt isn’t new by any means as pro golfers have been doing it for years to raise money for their favorite charities.  But when golf pro Chris Kennedy challenged his cousin Jeanette Senerchia (whose husband suffers from ALS), the whole thing just took off after Senerchia accepted the challenge and nominated some of her friends.

How successful has it been?  Well according to the most recent ALS Association press release donations as of today are up to $41.8 million, compared to $2.1 million during the same period last year (July 29 to August 21), while new donor numbers are above 739,000.

The challenge is running through just about every segment of the population from athletes, actors, politicians, and performers.  And it should be no surprise that many in the craft beer (as well as spirits and wine) world have accepted the challenge as well.  Here’s a quick run down of some of the more recent ALS Ice Bucket Challenge acceptors from Delaware:

Owner Al Stewart of Stewarts Brewing takes the challenge in his glass walled brew room while people in the dinning room cheer him on:

Klaus from 16 Mile Brewing proves that sometimes it’s better to be on the other side of the bucket:

The guys from Fordam/Dominion also accept:

As does Mispillion River, putting their own little slant on the challenge:

Of course, many people challenged DFH, so finally owner Sam Caligione proved he’s just one of the guys like everyone one else and accepted the challenge. Well, as much of “one of the guys” you can be when you can get Nascar driver Jeff Gordon to do the honors (warning, audio is loud):

Established in 1985, The ALS Association is the only national non-profit organization fighting Lou Gehrig’s Disease on every front.  By leading the way in global research, providing assistance for people with ALS through a nationwide network of chapters, coordinating multidisciplinary care through certified clinical care centers, and fostering government partnerships, The Association builds hope and enhances quality of life while aggressively searching for new treatments and a cure.

As the preeminent ALS organization, The Association leads the way in research, care services, public education, and public policy — giving help and hope to those facing the disease.  The Association’s nationwide network of chapters provides comprehensive patient services and support to the ALS community. The mission of The ALS Association is to lead the fight to treat and cure ALS through global research and nationwide advocacy, while also empowering people with Lou Gehrig’s Disease and their families to live fuller lives by providing them with compassionate care and support.