– Plus a couple of new labels!

Well, since we are now firmly on the path to 2019 I thought it would be a nice time to take a few minutes and look at Dogfish Head’s release calendar for 2018.

Granted, this information has been out for a while, mid- November for the most part, but I didn’t want to get to in front of the game. But now that 2018 is here (and apparently staying) let’s take a look.

Not much has changed in the Year-Round offerings with perennials such as 60 Minute, 90 Minute, Indian Brown, and Midas Touch returning, along with newer offerings Flesh & Blood IPA and SeaQuench Ale. However, 2018 does see the inclusion of two newbies to this category – Lupu Luau IPA graduates off of the 2017 occasional team to full-time status hitting the shelves in 12oz cans. Along with Luau, DFH will be offering their very popular Bitches Brew (well, I don’t know how popular it is, but it’s popular with me) in 12oz bottles but with the added twist of the beer being wood aged.

The Seasonal team, this year described as the ‘Off-Centered Art Series’ stays pretty much in tacked with Punkin Ale and Liquid Truth Serum holding down the fall and winter (I’m using seasonal terms like spring and fall pretty loosely here, check the calendar below for exact months and don’t kill me) slots respectively. Romantic Chemistry however, shifts to 2018 spring leaving 2018 summer open for:

DFH’s latest music collaboration gives a nod to The Flaming Lips, and is a tart pale ale is brewed with dragonfruit, yumberry, passionfruit, pear juice and black carrot juice. Wow.

Next, we have that total wild-card group that DFH refers to as the “Occasionals”. Bad news first, fans of Olde School, Saison du Buff and Oak-aged Vanilla WWS will find their beers missing from the shelves in 2018. Pennsylvania Tuxedo, 120 Minute and Festina Peche will be making returns however, look for them about the same times they were released last year.

Siracusa Nera does some Chris Angel type magic considering that (I believe) it was on the shelves recently although it was not on the 2017 release calendar. Well, unless something changes, it IS on the 2018 release calendar, so if you’ve found it and liked it, you will again this year.

Their holiday IPA 12-pack will make an appearance again, the brewery stating that included beers will be announced later. I wouldn’t be surprised if an IPA that’s not on their release calendar makes an “holiday pack only” appearance.

Two new entries join the ones above, first Fruit-Full Fort, a Belgian-style ale fermented with four different types of beer juices including boysenberry, blackberry, raspberry and elderberry, which the brewery describes as “ageable”. And finally: 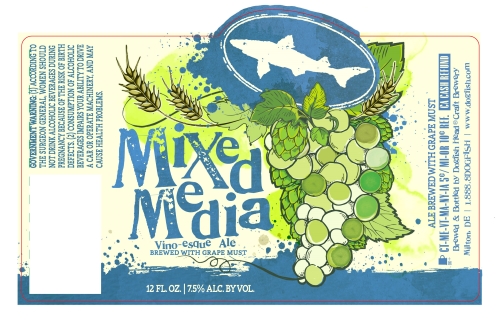 A beer that’s splitting its fermentables bill between 50.1% grain and 49.9% grapes. And if you think that 0.1% isn’t important, well it’s apparently what is keeping this beverage firmly in the “beer” category.

And there you have it. Dogfish Head’s 2018 release calendar. If you’re more of a visual person, my quick and dirty graphic can be found below. For a more comprehensive (complete with packaging options for each beer) and agreeably much prettier version, you can go on over to the DFH site, here.

Happy 2018 everyone, and as always, it’s time for another beer! 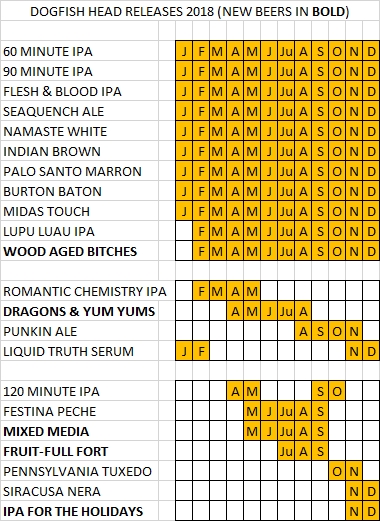