If I was asked to name my favorite cuisine, I think I’d have to say – pub. Oh, don’t get me wrong there’s nothing wrong with Italian, Greek, Asian or other culinary classics, but give me a place that makes a great burger or a killer plate of wings and I’m there.

Even outside of pubs I still look for those tavern comforts. I’m not above going out to nice places for lunch whether for work, or play, and still scanning the menu for what the place may offer as far as pub-like fare.

And along those lines if you see me intently contemplating the menu I’m usually not looking for the newest special, or gourmet cucumber, chicken wrap. No, my mind is usually locked in the complex, calculus laden calculation designed to compute what I can order that will get me the most french fries.

As most people will concur, at their basic core- fries rock. Not just because they’re versatile starch bombs that not only work well on their own paired with your condiment of choice or piled high with all kinds of calorie increasing craziness, but let’s face it, it’s because it’s so hard to make a good one at home. Ok, it’s not hard, a few potatoes, a sharp knife, some hot oil, and you have…well anything from oily, limp potato sticks to charred, charcoal like chaff depending on your attention span.

No wonder the frozen section of your local food market chain is chock full of all kinds of choices to help you conveniently get to fry Nirvana. But to be honest, I seldom go this route because let’s face it, most of those options are lacking and resemble nothing like the fries you can get out – even at those fast food joints. 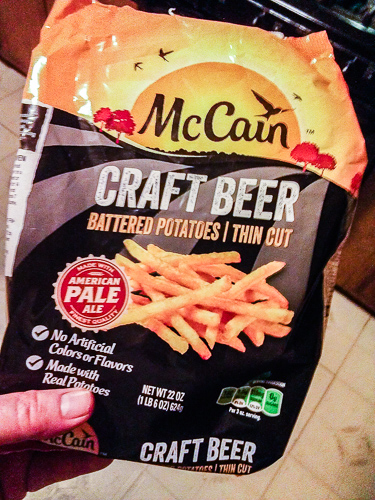 But someone at work recently asked if I’d seen McCain’s Food’s craft beer batter offerings, and I was intrigued. Not because I’m always looking for the next great frozen side dish, but because…oh, come on, you know why.

Certain segments of the beer world are still (rightly or wrongly) holding tight to the term “craft” and what it should exactly connote to anyone inside or outside of that world. The Brewer’s Association still conveys a very clear (if abet, fluid) definition of what a craft brewery is, even going so far as to recently condemn Walmart for attempting to blur the lines with their recently offered company brewed beer.

So for some company to plaster the words “craft beer battered” across their bag of cryogenically suspended spuds I thought was pretty daring, so I picked up a bag of fries and onion rings (because if it’s not fries … it’s onion rings) and did some sleuthing.

The bags state “Made with finest quality American Pale Ale” which is nice bit of initial encouragement, but from there it wane’s fast, much like a third act in a horror movie where the heroes are sure they’ve destroyed the monster, only to watch it rise from the smoke and ashes.

There’s no mention of whose beer McCain specifically uses, which seems like a lost marketing opportunity for both McCain’s and whoever makes their beer. I mean, if you had company that makes frozen breaded confections, you’d want customers to know that you were using Stone’s or Bell’s, wouldn’t you?

I was impressed to see that beer is actually listed as an ingredient whose components are broken down as: Water, Malted Barley, Corn Syrup, Hops, Salt. Close. I mean you could make beer out of those ingredients but the corn syrup isn’t something you’d expect to see on the grain bill from your local brewer who you would associate making a “craft” product. Also, water treatment not withstanding, salt?

No, this just doesn’t seem right.

A little digging finds that McCain indeed has a page on their website dedicated to Brew City, but it seems to be more about a marketing brand set up for their products in the food service industry than having anything truly to do with craft beer.

The product itself is pretty good entry in the home fry market. Battered fries aren’t something I come across much and as for these, well let’s just say I think they were using the term “battered” pretty liberally. The onion rings were pretty good and to be honest I’d spring for a bag again the next time I’m in the mood for a quick fix and don’t feel like battering up a batch of my own.

Bear in mind however, that I say that about both products having used the deep fry option for both. You’re mileage my vary in an oven, which is why I tend to forego it.

I didn’t start this article to rip on McCain or put their products down. To be honest, I was hoping to find a craft beer connection that I could hold up as another example of how craft beer is working its way into different aspects of our lives. But sadly, I have to conclude after some sleuthing and contemplation that I’m pretty confident that the closest thing to craft beer in these commodities is the one you open when you sit down to dinner.