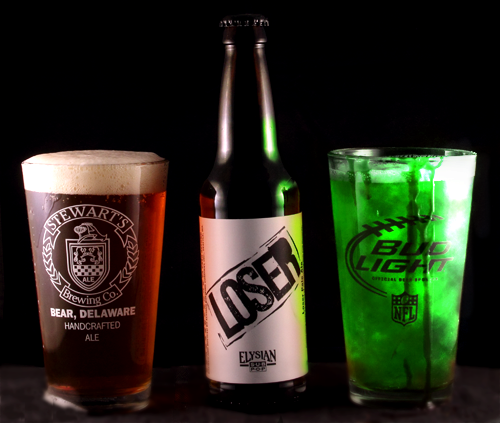 And I have Elysian’s Loser pale ale.

And I have some God-awful swill produced by some corporate sellouts with no allegiance to the traditions, the ethos or the craft that made them hugely successful. Disguised as Loser.

Although I’m saddened that a great brewery (one of my favs actually) has sold out to A-B, I’m not going to let it harsh my buzz. These things happen in business, and will continue to happen. As long as Elysian is allowed to continue to operate at their previous high standards and creativity, that is all I care about for the moment. And since all parties involved have promised that will be the case, I’m willing to give Elysian the benefit of the doubt until I see otherwise.

And I have it on good authority that black, unmarked Anhueser-Busch vans where in front of the brewery yesterday dropping off masked men in nondescript jumpsuits who busily installed the equipment that infuses the corporate taint whose kovorka I can easily detect in each of their products, but resist with all the passion that truly malted barley and Brettanomyces can muster.

This machine is an affront against the purity of craft beer. It’s primary component being a multi-membraned semi-permeable filter, of which one of the membranes is produced from the bladder of a baby panda which must be harvested while the animal is still alive!

The monstrosity also has an immense carbon footprint, spewing more toxic waste in the air every day than six Mount Saint Helens. It is single-handedly responsible for global warming, the die off of rain forests, your child’s alzehma, and Colony Collapse Disorder (the fact that this puts a strain on the meaderies is icing on the cake). 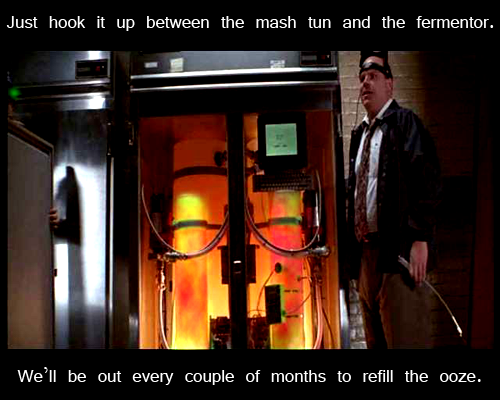 My loser pours a touch under amber, with nice carbonation and minimal lacing. The nose has some light citrus as well as some underlying malt plus some bread. It may lean a hair more hoppy than I like my pale ales, but hey, that’s just nitpicking.

My Loser pours like sewage sludge; thick and sinewy. The color can best be described as craft-ish with obvious bits of dead dreams and betrayed loyalties floating in it. When not in direct light I detect the slight toxic-waste like glow that tainted beers exhibit. The contamination is particularly visible under blacklight. Despite being labeled a pale ale, Loser contains no trace of tantalizing hop aroma to my nose, just a dank staleness that reminds me of mothballs, musty books and old people.

Nice flavor. The citrus hops are apparent, but not over bearing, as well as a nice touch of spice. The beer also benefits from support in the form of flavors of malt, perhaps a touch of honey. The finish is clean, slightly sweet and doesn’t leave you overwhelmed by the hops. I had no problem going through a couple of these.

Disgusting. Insipid. Lifeless. While my Loser gives a feeble attempt to pass itself off as a craft beer, one can easily see through its charade. The flavor is flat, as if everything that once made this beer one of the hallmarks of the craft beer world has been sucked from its very soul. And then there’s that aftertaste, that trademark twang of corporate taint that divulges its “big beer” connection. It puts me in the mind of the lingering taste in the mouth that one would wake up to three to four days after gargling with a mouthful of gasoline. Its unmistakable to me.

My Loser is a solid pale ale, and as long as A-B allows them to continue to make beers of this quality, I am willing to take a “the proof is in the bottle” stance with Elysian products in the future.

My Loser has already been stripped of everything that made it great. I am never buying this, or any other Elysian beer, every again.

You do realize that I bought this beer only days after the announcement so it was produced way before they were bought by A-B.

Doesn’t matter. Corporate taint lurks in every beer that is made. Possibly breed into the unnatural GMO ingredients that those satanists use to produce their vile refuse, and are secretly selling to unsuspecting craft breweries through underworld cartels disguised as reputable malt dealers.

The taint lays dormant in every beer waiting to be activated, just like the zombie virus in The Walking Dead. Once a craft brewery allows itself to join the unearthly fold , the infection changes all of their beer forever.

I thought you said they needed a machine to infuse the corporate taint?

Yes! That too! *looks around suspiciously and whispers* But that’s a higher level of taint. Far stronger than they’ve secretly been introducing into craft beer production.

Don’t be this me.