He paused. As if a moment of silent tribute had to be given before he (or anyone) should walk through the door that was open before him. The door certainly deserved no  such reverence, the single paned, fullview door was like thousands of others he’d passed before. No, it was what lay beyond the door that forced him to take a mental pause. Then finally, thinking that he’d surely shown enough respect, he walked in.

The room was considerably darker than the sun lite parking lot he’d just left. But even as his vision waned, his eyes slow to adjust to the reduced light, his other senses kicked in, telling him everything he needed to know.

The warm, slightly humid air kissed his face, a welcome contrast from the crisp, winter air outside. The sounds, metal against metal, the unmistakable trickling of running water, the hiss of steam, weren’t simply an assemblage or random sounds. No, they gave the room life, filling it with a symphony of organization and purpose.

But it was the smell. The malt. Fresh, and sweet; floating in the air like wisteria on the first nice spring day. It permeated the building, to the extent that he wondered if the structure could ever be rid of it. And it was the smell that took him back. Back to a time when his house often smelled like this.

If I were to write a book, channel my inner Oliver Gray, and have the need to describe a character walking into a brewery, that’s exactly how I’d write it. A man walking into a place that is open, filled with the sights, sounds and smells that hopefully take him back to a time when he too participated in the joys of brewing, whether that time be 20 days ago, or (in my case) 20 years ago. After all, that’s how it should always be when one walks into a brewery. But sadly, it seldom is.

Well, with a little clarification. Sure, sooner or later if you pass through enough internal doors you’ll walk into the brewing area and be greeted by all the sensations described above. But not to often do you walk into the front door of a place and feel as if you’d just stepped into the brew house. It’s like walking into a house that has two doors, the one in the front enters the living room, and one on the side enters the kitchen. Sure, you’ve entered the house in both cases, but only of the entrances is going to give you a more satisfying smell of what’s cooking.

There’s very few times I walk into a brewery/brewpub/etc and feel like I’ve walked into the “kitchen”, but that’s exactly how I felt the moment I stepped in the Lancaster Brewing Company – the smells, sights, and sounds of brewing were very evident with the first step inside the door. If you’d ever stepped into a brewery before (or home brewed) I could walk you into LBC blind folded and you’d be able to immediately recognize the activity happening around you.

And with good reason, The Lancaster Brewing Company’s dinning area sits on what would be considered the ground floor with the basement below housing the brewing equipment.  A large, railed opening in the floor not only allows ample ceiling height for the tall fermentors below, but also affords a mezzanine-eyed view of the brewing area from the floor above, as well as letting the sounds and smells of the labor below permeate throughout the building. No brewing equipment sequestered behind brick or glass walls, for LBC. It’s right there below you, filling the room with all it’s sensorial glory.

There’s something quaint about it. So Lancaster. Although Lancaster is as “city” as any city can be, it’s highly associated by outsiders with the farms and attractions of the Pennsylvania Dutch community that thrive in surrounding same-named Lancaster County.

And the establishment just seems to capture that vibe perfectly. From the rustic, wooden interior; the brick facade that gives the building the appearance of being painted in what I’d call classic ‘covered bridge red’; to even the brew master himself, Bill Moore, who walks around the building, his stout frame and mountain-man enviable beard giving him the appearance of a man who’d be just as comfortable building furniture, or working of farm equipment, if he hadn’t been too busy honing his chops at industry respected breweries such as Independence, Stoudt’s and Sly Fox.

Tracey and I had arrived at LBC for lunch due to some temporal miscalculations. We’d spent the night in York, PA, attending my daughter’s first college play and since we had the entire next day off to get home, we obviously had a couple of breweries lined up as possible lunch stops. Unfortunately, neither place within walking distance of our hotel (Mudhook Brewing Company, Liquid Hero Brewing) opened until 4pm – later than we wanted to stay. So we hit the road, and made a back up plan.

And I’m glad we did, because as you can tell Lancaster Brewing really struck a chord with me, the food was good and the beers tasty as always. We both started with their Winter Warmer Ale (which by luck had just recently made its seasonal debut), a beer that I’ve grown to really enjoy over the years, and one that the brewery uses for a good cause – proceeds from the sales of Winter Warmer help the PA Wolf Sanctuary.

I followed up with their Shoo-Fly Pie Porter which I was very pleased with (love a good porter), while Tracey went for the Milk Stout that she enjoyed, even though it had a touch more coffee in the profile than she would have liked.

Unfortunately, two was the limit for the driver and the navigator (especially since the first one clocked in at 8.9%). So, to soon, we found ourselves on the road home.

I’d highly recommend a stop at LBC if you’re ever in the area. There’s just a sensational, beer lover’s appeal to it. If you do decide to go however, I do offer one piece of advice – go to the website and get the low-down on parking. LCB has it’s own lot, but it’s small – maybe 20 cars small (and it would probably help if your car WAS small), so check out the alternate parking options at the website.

Also keep in mind that brewing was actually going on while we were there, which I’m sure doesn’t happen every day that the restaurant is open. So who knows, maybe on the day you go you will be able to enjoy a nice quiet meal, with none of the clatter or rumbling associated with the activity of brewing and enjoy a fresh beer without the distraction of that sweet smell of mashing malt in the air.

But for your sake – I hope not. 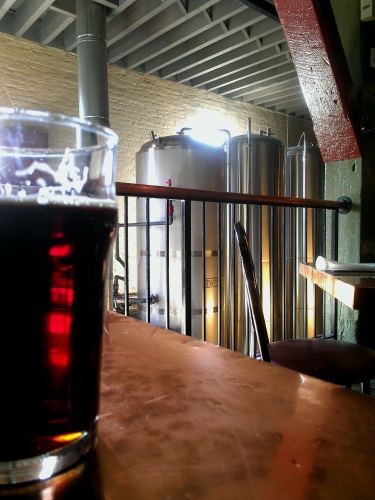 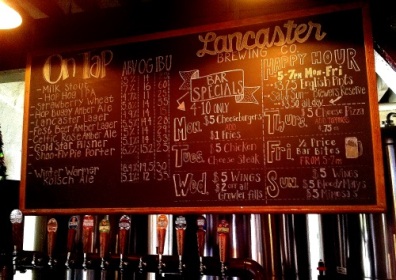 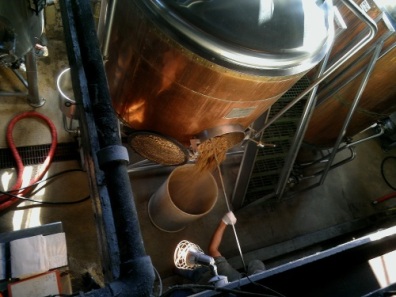 A Birds Eyes View of The Mash Clean Out Below 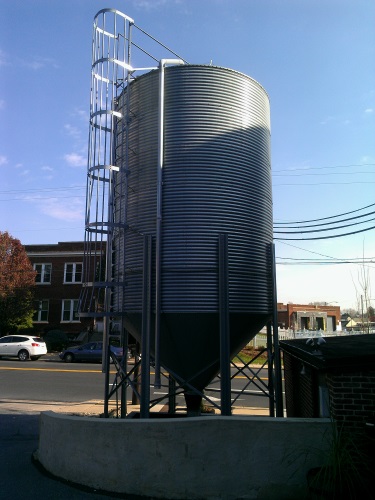 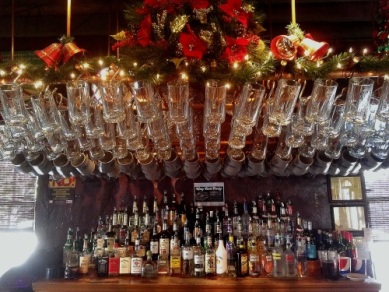 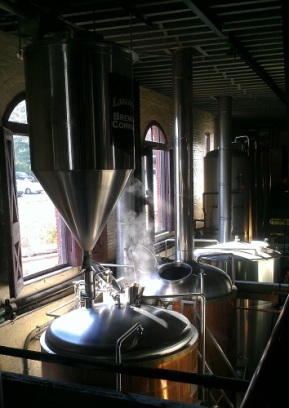 Steam Rising From the Kettles

Time for another beer…

6 thoughts on “The Not So Local Tap – Lancaster Brewing Company”