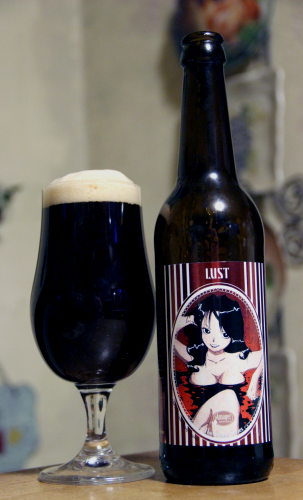 So you’re probably asking yourself, “what does a beer in a series based on the seven deadly sins from a brewery in Denmark have to do with a beer blog centered around Delaware?”  Well to be honest, nothing.  But much like LimpD over at It’s Just the Booze Dancing indicated that he is sometimes drawn in by creative packaging, so too am I.

It especially hits while I’m roaming the long shelves at State Line Liquors surveying the hundreds and hundreds of possible selections.  At times like these, when I’m being over whelmed by the shear volume of choices, that unique packaging or a bit of creativity from the brewery can help their product standout from the rest.

So it was that the other day I came across a series of beers from Amager Bryghus (Don’t bother unless you can read Danish.  The button that is  supposed to bring up an English translation of their website only pulls up a page that says, “Sorry we haven’t gotten to the English translation yet.”  But hey, at least THAT’S in English.) in Denmark, each named after one of the infamous seven deadly sins.

The origins of the seven deadly sins can be traced back to the bible in the Old Testament:

These six things doth the Lord hate: yea, seven are an abomination unto him:
A proud look, a lying tongue, and hands that shed innocent blood,
An heart that deviseth wicked imaginations, feet that be swift in running to mischief,
A false witness that speaketh lies, and he that soweth discord among brethren. (Proverbs 6:16-19)

Over time, the concept of “capital vices” was expanded and passed on to Western Christianity through translations of the Greek monk Evagrius Ponticus where they remained pretty much unchanged for two centuries.  Then, in 590AD, Pope Gregory I (The Great) consolidated several of this sins into one and shorten the list down to the seven sins we commonly know today.

The theme of the seven deadly sins has been used endlessly throughout history.  References to them can be found in tapestries, paintings, sculptures, stained glass and just about any other form of art, especially those incorporated by the Catholic Church.

They also turn up in more modern art forms, probably most notably in the movie Se7en, in which Brad Pitt and Morgan Freeman portray detectives trying to capture a kill responsible for a series of grisly murders patterned after each one of the sins.  In the WB series Supernatural, some of the seven deadly sins turn up in the personification of demons which have escaped from Hell.  And in Jimmy Buffett’s “Bank of Bad Habits”, the singer references each sin and how it should not be applied to your neighbor’s wife, as well as reveling that the up until now unknown eighth deadly sin is (of course), pizza.  Not to mention being the title of one of my favorite Flogging Molly songs.

Those last, more…cavalier, uses of the seven deadly sins is a common departure now a days from the more stern warning the original Bible passage was meant to be.  Most likely because, although in the case of a few of them, our modern “everything in moderation” world allows us to accept that there are going to be occasions where sins such as gluttony are going to get the best of us.  I’m thinking BBQ.

What’s that?  So with a shelf full of sins to chose from, why did I chose Lust? Well..ah.. HEY, LOOK AT THE TIME!  LET’S TASTE!

THEM: As I said, the website is in Danish with no supplied English translation.  But with the help of Google Translate I’ve been able to find out that the website really gives us very little information on how this puppy is brewed.  It does speak poetically about brewing the beer with “sensual sugars”, but other than that there’s not much to glean.  Well, except that they decided not to add powdered deer penis to it.  That’s a plus, right?  Yeah, that has to be a plus.

Anyway, as a result, we’re going to have to go…to the label!

Lust is a Belgian style ale that clocks in at 9.2%ABV.  I’ll give you a second to digest all of that.  Ready?  Let’s move on.

ME: Lust pours a deep brown with a fluffy off-white head that recedes into an island/ring of bubbles that leaves a very nice lace on the glass when swirled.  With the depth of color it doesn’t jump out at you right away, but the beer is cloudy, almost as if it was bottle conditioned, although nothing in the information states to that.

The nose turns to the sweet side, with notes of chocolate, malt, brown sugar and a slight touch of that candi sugar taste that’s not uncommon in some Belgian beers.  There’s also a touch of fruit in there, thinking raisins, but it’s the sweet smells that really take center stage here.

The taste is pretty much the same – sugars, honey, malt; a touch more fruit that I’m not able to pull out and identify.  The beer leaves a full on coating of sweetness all over your mouth, but at the end there’s also a touch of coolness, almost like a mint (it’s not mint), and the slightest pop of booze.

Lust is a big mouthful of sweetness (is there a metaphor there?) with a touch of attempted balance on the back end, but with each sip it paints your mouth with coat upon coat of sticky sweetness.  Much like first time home owners in the 90s trying desperately to cover up those horrible 70s colors in the living room and kitchen.  The beer is good, well constructed, and although the sweetness is in line with what the brewers apparently had in mind, at the end of the glass it’s just too much for me.  I liked Lust well enough that I might try some of the other Sin Series beers in the future, but not so much that I would have this one again.  And it certainly wouldn’t take a place amongst my regulars.

What’s that?  Oh you know, those regular beers you always turn to when you just want to “have a beer”.  No thinking, no searching.  Just you and the beer.  See sometimes in our constant quest to try every beer we can get our hands on, we come upon one that….ah, but that’s another post.

Time for another beer…

3 thoughts on “Class in a Glass: Amager Bryghus’ Lust, What’s Your Deadly Sin?”