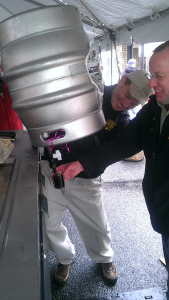 Some people would be content if they were Mary Hutchins, Jeff Norman and the rest of the team behind the annual Kennett Brewfest.  After all, when you’re the heart and soul behind one of the premiere beer events in the area, there really should not be anything else you feel compelled to do.  You have nothing to prove, nothing more you need to achieve, nothing at all.  That is unless you ARE Mary, Jeff and the rest of their team who, not much more than a week after this year’s awesome Kennett Brewfest with over 80 breweries, put this up on their Facebook page.

Not happy with just throwing one of the largest (and in my mind the best) beer festivals in our area, they decided to host another, this one in February featuring bigger beers that you’d find more commonly in the Winter months.  But instead of the large fall event they’re now know for, they decided to go back to their roots when that event was smaller and held in a side road off the main street in Kennett Square, invite a smaller number of brewers and cater to a smaller crowd.  The result – Kennett Winterfest.  Forty brewers and 800 beer lovers showed up on a drizzly, damp Saturday afternoon to have a great time, Kennett style, and to be honest no one really seemed notice the weather.

As I made my way into the festival, I first turned left and soon found myself sipping a Psycho Kilter from Starr Hill.  Starr Hill should be available in Delaware soon, and I encourage you to seek them out.  I then found myself in front of the Waywood Beverage table which was pouring Founder’s Breakfast Stout.  With its not so subtle hint of coffee, you’d think I wouldn’t like this beer but for some reason I do.  There’s enough chocolate in it to keep it from being a one trick pony.  This is a complex beer.  And excellent on a chilly day.

I then found myself in front of a table that I was very interested in, Kennett Brewing Company, and apparently I wasn’t the only one interested.  Early in the festival they easily had the largest crowd in front of their table.  I first tried their Scottish 140 Shilling ale.  I actually thought this was a bit on the light side, but in fairness I did just have a Breakfast Stout.  The beer tasted well made and clean.  I then went back for their 1934 Kid xxx Pale Ale, that I really liked.  I unfortunately didn’t get a chance to talk to much to the guys behind the table, but I did find out that they are looking for a location around Kennett Square.  I can’t wait to see what the future holds for these guys!

What followed was a parade of excellent beers.  I of course made my way over to Hill Farmstead to try their Harlan IPA, and again was not disappointed by the beer these guys are making.  I also got to taste Lancaster Brewing’s Double Chocolate Milk Stout, Lavery Brewing’s Imperial French Ale, DuClaw Brewing’s Sweet Baby Jesus Chocolate Peanut Butter Porter, and many others.  And I certainly was not going to leave without trying Port City Brewing’s second anniversary offering, Two: Stong Smoked Porter.  Awesome stuff.

Of course I stopped in to see the local boys.  Pete, Steve and Bryan were pouring for Argilla, having brought their Mildly Rye and Panic Bar Porter.  I finally got a chance to try Twin Lakes’ Jubilicious Winter Ale, which I found quite nice.  And the guys were nice enough to give us a demonstration on how to get the last drop of Tweed’s Stout out of a firkin.

In a follow up conversation with Mary she wanted me to pass her thanks on to the brewers,  Nicole Grebloskie and the rest of the Historic Kennett Square fundraising committee and volunteer Jeff Norman, “who has been organizing the Kennett Brewfest since its inception 16 years ago and can now add the Winterfest to his list of highly successful events.”

When asked about next year she said, “We were really pleased with the event this year and certainly plan to repeat it next year.”  In fact, since our exchange they’ve announced that the second annual Kennett Winterfest will be Feb 22nd, 2014.  But that doesn’t mean one should over look the next Kennett Brewfest, scheduled to be held on Oct 5th, 2013.

So now Mary, Jeff and the whole Kennett team can lay claim to hosting two amazing beer events.  Surely they’re content now.  Well, so you would think.  That is until 8 days after Winterfest when this got posted on Kennett’s Facebook page:

One thought on “2013 Kennett Winterfest”