Tracey and I don’t do a lot of beer dinners.  Not for any solid reason, we just don’t seem to get to many.  However, when she found out that Two Stones Pub was having an Ommegang tap take over plus a six course beer dinner paired with the beers from Brewery Ommegang on my birthday, well as she put it, “present obtained”.

If you’ve never been to a Two Stones’ beer dinner (and we hadn’t) the set up is nice.  Dinner is served in the back dinning room which is set up with large group tables to encourage comradery and discussion between the guests.  Chef Stigz and Chef Blair pop in and out of the kitchen to let you know about the course you are about to enjoy, and Ben is always in the room sharing his knowledge about the brewery, the beers and and what you can expect from the dinner in general.

The first course was simple, a cheese platter consisting of a dutch vintage 3-year gouda, valdeon, beemster 6-month goat cheese and a nice helping of Ommegang’s Hennepin.  There’s not really much to emote upon here, cheese and beer, do I really need to say anything?  Very good start.

The second course is were they started to kick it into gear – oyster stew.  I found their take on this classic dish to be very intriguing.  The broth was light and creamy, built on a base of carrots, celery and shallots; and didn’t have an overly powerful oyster flavor in it of itself.  No, the “oyster” in the oyster stew came from two large oysters that had been poached in Ommegang Hennepin.  This was delicious, and should make regular appearances on the everyday dinner menu.  Served with a glass of Ommegang’s Whitte.  Yummy.

Next up we had deviled eggs.  Ok, I’m not all in on deviled eggs.  Never have been.  But these weren’t my mom’s deviled eggs.  Served with black pepper bacon, shaved parmesan and micro greens, the eggs had a depth of flavor that would have be fine on their own.  But that would have be to easy.  Instead, they were served on a smear of lemon-garlic cream which may have just been one of the the best things I tasted that night.  Must. Have. Recipe.  We also had a chance to have a little good natured fun with this dish as ironically, this was the first time Stigz had ever cooked deviled eggs.  I’d say he did fairly well.   Served with a glass of Ommegang Rare Vos.

Time to step it up again.  Tea-smoked duck breast and foie gras bread pudding with a blackberry-cider jus.  I love duck, so I was very interested in this dish and, if you’ll excuse the use of a warn out and tired joke, the only thing wrong with it was that there wasn’t enough.  Oh don’t get me wrong, this wasn’t one of those dishes where the duck was hidden, but it was so tender and juicy that I just couldn’t get enough of it.  I wouldn’t have thought that the bread pudding would be something I would have greatly enjoyed, but with blackberry-cider jus, the whole dish came together nicely.  Could it be any better?  Sure, just add a glass of Ommegang’s Adoration.

Ok, I guess if you do enough dinners, even ones with top-notch chefs, sooner or later you’re going to hit a clunker.  Five-spice venison with wild mushroom ragout, leeks and red wine gastrique.  What could go wrong with that?  The venison was breaded (to me it even appeared to be pounded flat) and deep fried.   Anything I could say about this dish, I’ll simply chalk up to it simply not clicking with me, and the possible issues surrounding having to deep-fry 30 pieces of venison in a short time frame.  I’ve had venison many ways, and this one just didn’t resonate with me.  Tracey had the same reaction although she was having more issues with the five-spice I think than the preparation.  Still, what arrived with the venison was very good, and the red wine gastrique was very tasty.  And nothing from the above took away anything from the Ommegang Three Philosophers that came with it.

Dessert.  Well, almost.  Sadly we had to leave before dessert to pick my daughter up from a school activity.  But Ben, being the great man that he is, packed us up a couple of slices of the  apple caramel cheesecake along with a container of the chocolate-belgian stout reduction that was to be drizzled on them.  However, the containers had clear lids on them, so when we got home my daughter caught eye of said cheesecake.  Not being able to say no to my daughter (who had eaten very little because of her activity) I offered her one of the slices, on which she drizzled the reduction and then proceeded to devour it as if she’d never been feed before, asking when she could start coming to beer dinners (you got a ways to go there Ms Sixteen).  Seeing this, I found myself curious and prepped the second slice, eating half of it before Tracey could get into the room.  Being that she’d just started weight watchers, I’m hoping she saw this as a “I was saving you from all those nasty points” gesture, more than the “I gave my slice of cheesecake to my daughter and she said it was so good that I just said ‘Oh hell’ and ate half of yours’, lack of self-control and discipline that it actually was.  The only down note about the dessert was that it was supposed to be served with Ommegang’s Chocolate Indulgence, which sadly, I had zero bottles in the house.

Anyway, those who remember my write up on Pescatore’s Autumn Craft Beer Dinner know that I seem to have some “technical issues” when it comes to taking pictures of dessert, and this was no exception.  So instead I’ll just ask my editor to toss in a random picture. 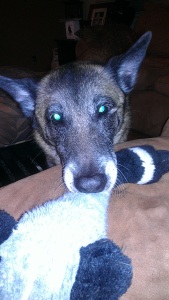 All in all the dinner was awesome.  Great food over all, great beer and a lot of fun.  I’ll definitely be keeping an eye out for what dinners the guys at Two Stones have coming up in the future.

Time for another beer…..some Chocolate Indulgence I think…