When we last left our Apocalyptically doomed beer blogger, he had just opened the first seal of Elysian Brewing’s “12 beers of the Apocalypse series”, Nibiru.  Although this brought the first Horseman; CONQUEST to bare, our reviewer did not mind, finding the Charles Burn adorned beer an interesting tempest of flavors.  Since then he has managed to locate and open the next two seals in the series (Rapture, an ale brewed with heather, and Fallout  a pale ale brewed with green cardamom), releasing WAR and FAMINE upon the world.  He had found both beers to be very solid and in fact, very close to one another except for the two key ingredients.  Both beers warranted a nod, but neither rated their own stand alone reviews.  However, upon preparing to open the fourth seal, Peste (which in French means plague); a chocolate chili ale, and thereby releasing the Horseman DEATH upon the world, he paused.   If through his deep, unyielding need for beer he was subjecting the Earth to once again suffer the plagues of the Four Horsemen

Huh? Wait!  No!  Not those guys!  Holy crap I’m trying to do a review here!  Is it to much to ask for my editor to display a little bit of focus please?

That’s better.  A little darker than I had in mind 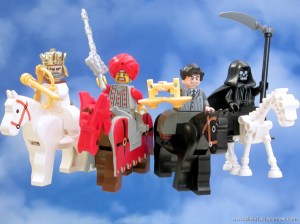 Ha Ha Ha.  So you got jokes now? Are you finished? Now where was I?  Oh yeah…If through his deep, unyielding need for beer he was subjecting the Earth to once again suffer the plagues of the Four Horsemen then the  least he should do is to give the doomed souls of the world a beer review.  Is Peste a beer mankind should carry to the edge of the Great Tribulation, when trumpets sound the End of Days? 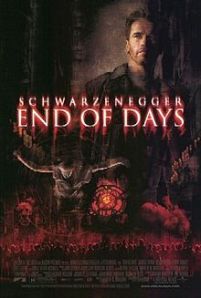 OK, I didn’t ask for a picture there.  I don’t know what’s gotten into you today, but no one thinks you’re funny.  So if it’s OK with you, I’ll get back to the beer.  Let’s taste.

THEM: The grain bill for Peste consists of pale, Munich, C-77 crystal and chocolate malts.  Both roasted and flaked barley are added and the beer is bittered with Magnum hops.  Peruvian cocoa, Ceylon cinnamon, and chipolte, cayanne, ancho, guajillo and pasilla peppers are also added.  ABV clocks in at 7.5%.

ME: Peste pours on that fine line between dark brown and black.  I got very little head from this beer which might not be surprising depending on how much oil and fat ended up in the finished product from the chocolate and the chilies.  Bubbles hate fat.  The nose isn’t anything remarkable, just a straight forward presence of chili and cinnamon which gives a slight tickle to the back of the nose.  The flavor is equally as one dimensional, a slight (and I’m talking VERY slight) feel of malt/chocolate and then heat.  Mostly that “Red Hots” cinnamon type heat, but there is a little bit of the pepper essence that comes from chilies.  The heat isn’t the fiery “all mouth” burn you get from hot sauces, but a prickly heat focused in the center of the mouth.  The back end is so clean as to almost be sterile with a little bit of a syrupiness lingering but for the most part all you’re left with is a tingling mouth.  After about 3/4 of the bottle, that syrupiness did start to carry some cocoa/chocolate notes, but by then it was too little late.   For the record, I wish breweries bent on putting heat in beers (especially ones that are supposed to be “chili” beers) would lay off the cinnamon.  Maybe it’s me, but I find its flavor to distinct and unwanted in a beer that could easily get any desired heat from the five legitimate chilies the beer contains.

Elysian has fast become one of my favorite breweries, but not everyone gets it right all the time and sadly, I have to put this one down as the first clunker I’ve had from them.  If they’d up the malt/chocolate and toned down the bite (preferable for  me by getting rid of the cinnamon) I think they could have really had something here considering the very appealing grain bill the beer is built off of.  Since it’s part of a one off series, I’ll cut them some slack.  If this was a regular offering, my disappointment would have been far greater than it is.  And in truth, therein lies Peste’s strength – that it’s part of a series.  That means 11 other beers to choose from (coming up; Ruin, a Rosemary Agave IPA and Wasteland, an Elderflower Saison) when December 21 rolls around.  Because if the Apocalypse was on nigh and Peste was the only beer left to drink, then I’d willing toss myself into the abyss to face judgement day.