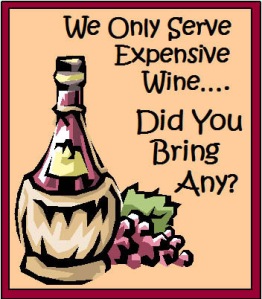 It dawns on me that during my relatively short time as a blogger that I haven’t said anything about wine.  While on the surface this seems understandable as this is primarily a beer blog, it is none the less a shame because when I started this journey I started on the wine side of the road, forming a lot of the opinions I have on alcohol in general in that arena.

So with that in mind I’m going to share with you some thoughts on buying wine for the every day man (or woman) in the context of something you’re going to drink everyday, or at least with the thought that you’re going to drink it in the relatively near future.  I feel that this approach to wine is pretty solid in that it takes out all the factors brought in from the vintner and the seller and places the onus for determining the value of the wine on the only person in the equation that truly matters – you.  I also feel the system is easy enough for anyone to master because it focuses on price which is a common denominator for any wine, although ironically I will state that of all the factors that can be used to judge the quality of a wine, price in reality is probably the least important.

The first thing I tell people when they start down a wine journey is that they must build themselves a working wine knowledge.  Most people sigh and look defeated at this point, believing that what I’m asking them to do is lock themselves in dark, hidden room in some library with the arduous task of memorizing topographical maps and meteorically trends of every grape growing region in Napa and France.  Yeah, forget that.  That stuff isn’t important.  Well actually it is very, very important if you’re growing the wine (which, you’re not) and important if you’re trying to convince someone to buy the wine (which again, you’re not).  But for you the buyer?  Nope.

Instead what I would want people to do is simply drink wine, but pay attention.  Do you like certain wines?  Can you tell me in ten words or less why you like that particular wine over another?  Can you give me one or two examples of wine you drink that fall into that description?  People again feel daunted at this task when first purposed because they believe they need to learn some arcane, coded “wine speak” that would put the secret language of the Masons to shame.  You don’t. Again, leave all that nonsense for the growers and the sellers.

The example I’ve actually used a number of times when talking with people usually unfolds like this:

Hopefully at this point a light bulb goes off over their head.  Most people do know exactly what they like, they either haven’t taken the time to really figure out how to describe it, or worse yet been lead to believe that their way of describing it isn’t “technical enough”.  Again, rubbish.  The conversation above is all you need in any five star restaurant with a wine guy who knows his cellar to pare the type of wine you’d be most interested in having with your lobster down from 60 bottles to maybe 4.  And we didn’t have to break out the decoder rings.

Once you have your own working wine knowledge (and again, chances are you already have it more than you think) we can put it to use.  As I said above, price can be a poor factor in judging the quality of a wine.  So many elements influence what a vintner needs to sell his wine for in any particular vintage to make the profit margin he needs to hit, that it’s quite possible that he could be asking $25 one year for a bottle of wine that the previous vintage was only $20 AND – the $25 dollar bottle not really be any better than the $20.  But price is important to you, unless you’re lucky enough (unlike me) to not be concerned about how much you’re plunking down for a bottle of the grape.

There is only one rule I want you to really try to follow when you’re in a situation of tasting a wine – do it blind to price.  Do every thing you can NOT to know how much someone wants for the bottle you’re tasting until after you tasted it.  I realize in some cases this can be almost impossible, but try as much as you can.  Then it’s simply a matter of tasting the wine.

If there’s a guy there telling you all about how it was grown on the north side of the mountain, 23% of this grape, yada yada – nod your head like you’re hanging on his every word, but ignore him.  Focus only the wine. And once you’ve tasted it and “analyzed” it as much as possible ask yourself one simple question, “How much would I be willing to pay for this bottle of wine and not feel that I paid to much.”  Look back at that sentence.  Those “I”s are bolded for a reason.  This is your judgment on the value of the wine.  Not the vintner’s.  Not the seller’s.  Not the guy standing next to you trying the same wine.  It’s yours, you own it.  So what does this tell you?  Let’s look at two different scenarios.

You’re at a wine tasting and a gentleman in a suit just poured you a glass of wine.  After tasting the wine you decide that if you had paid $15 dollars in a store for it you’d believe you’d have gotten good value for your dollar.  After a little back and forth the gentleman tells you that it’s a $30 bottle of wine.  Walk away.  Unabashedly.  Unashamedly.  If the wine is twice what you think it’s worth to you, nothing else matters.  And don’t let anyone tell you that your palate isn’t “sophisticated enough” to appreciate a high dollar bottle of wine.  That elitist bull crap is one of the main foundations of what’s wrong with some sectors of the wine world today.

Oh I’m not going to lie.  There is a certain knack to tasting a high dollar bottle of wine that’s meant to be laid down and aged for 10-15 years after you buy it.  You have to pick through the tannins and decide how it’s going to taste after it ages.  But that’s not the wine were talking about here.  Most wine produced is made to be drunk within a year or two after purchase, and if you’re anything like me the life expectancy of a bottle of wine in my house can be measured in days, not years. 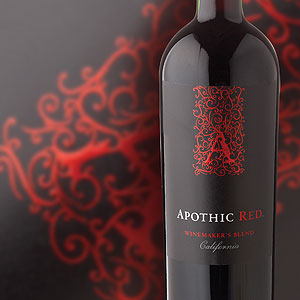 So, scenario number two.  You’re at my house and I pour you a glass of wine.  By the end of the night you believe that again, the wine (to you) is drinking like a $15 dollar bottle.  During the course of the evening you learn that I picked it up at the local wholesale warehouse for $8.  Go buy some.  Heck, go buy a case.  Hell, go buy a case and then invite me over to help you drink it.  I cannot over state how many well knowledged wine people out there play in the $10 and under price range.  Finding an $8 bottle of wine that drinks like a $20 bottle should be considered a constant goal for the every day wine person.  There are more of them out there than you think, and they are worth seeking out.  As an example I point you over to Roberta at Homemade Delish, who agrees with me that Apothic Red (which I get at BJ’s for $9.99) drinks pretty damn well.

Can you translate this thought process to beer? Theoretically, yes.  But the dollar swing between six packs of beer is in most cases only a couple of bucks, and so it loses a little of its usefulness when you’re comparing two six packs that are $2 apart, verses bottles of wine that can be $10, $20 or even $50 dollars apart..  Happily, I don’t remember running into any $40 dollar six packs.

Anyway, that’s a few thoughts on approaching wine for the every day buyer. It does require a little more engagement from the drinker then just deciding if one “likes it”.  But in the end I think the process can really work to ensure that someone is getting what they believe is value for their money.   If you take only one thing from this post then let it be this, a wine’s value is truly assessed by only one person – you.  It doesn’t matter what anyone else thinks it’s worth, or what wine gibberish they use to try to convince you that it’s worth its price tag.

Time for another glass of wine.

2 thoughts on “Determining the Value of a Wine – to YOU.”